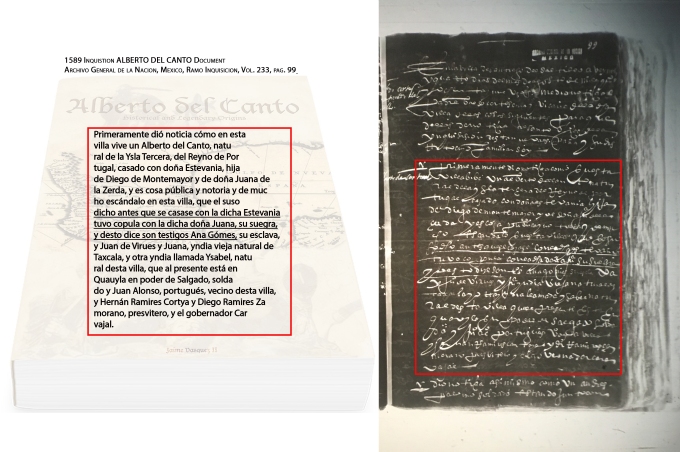 In March 2018 I made a dedicated trip to Mexico City to see how close I could get to the Alberto del Canto Inquisition documents.  As far as I know, there’s two different sets of documents, both published as transcripts by Vito Alessio Robles in 1945.

I felt the need to see these documents in person, since there were so many legends surrounding the manuscripts including various books and websites claiming the Inquisition documents accused Canto of being either a Jew or Converted Christian.

I flew direct from San Antonio, Texas to the Benito Juarez International Airport in Mexico City.  The Archives of Mexico City are housed in a century old prison known as the Palacio de Lecumberri, a ten minute taxi ride from the airport.

I requested the two inquisition documents but was only allowed access to the material via microfilm and through an analog microfilm machine in a old prison cell.  The pages on the film appear black with white lettering.  I took pictures of the images above the machine.

The manuscript gives the homeland of Alberto del Canto as the Island Terceira of Portugal.  It names his wife as Estevania daughter of Diego de Montemayor and Juana de la Zerda.  The witnesses claim the whole community knows about the scandalous public affair between Alberto del Canto and his mother-in-law, whom Canto is accused of copulating with before he married her daughter Estevania.

This particular item is 4 sheets, the part that pertains to accusations against Canto appear in the red border.